Will generation Y change the face of the world?

This generation, which comes after generation X, gathers people from 17 to 37 years old – born between late 70s and mid 90s. Generation X is the generation born after the Western Post–World War II baby boom. Why is there such an important divide between generation Y and the previous generations?

The role of new technology:

“Digital natives” was used to describe generation Y in North America, because they were born and raised in an emerging tech and digital world. 64% have access to the Internet on their phones regularly, 38% are watching more TV online or on their phone than on TV. These young technophiles have a tech “sixth sense” and are constantly connected, ready to bring fresh air and a certain amount of advantages into the work atmosphere, and to revolutionize working methods. The fact is that they will eventually make up  75% of the workforce, and those 75% have never known a world without computer technology, and will always cherish a collaborative and instantaneous world. They have a high expectation of a greater integration between their physical life and their digital life. They respect transparency of information.

New technology is no longer a medium put in place to make their life easier, but is a way of living, a lifestyle.

Generation Y is in the center of changes, as an observer, a consumer but also as an actor.

We could then conclude that this generation is going to change things and do it right, a generation full of imagination, innovating ideas and most of all, ambition, but is it really the great generation some people describe? Is it exciting or scary to think that we are given up the entire world to a completely new generation with different values and beliefs ?

How is generation Y? 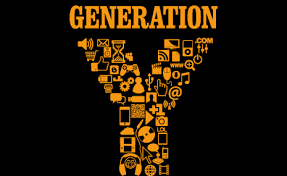 These people are passionate people and they care about their interests and issues.

They feel entitled to have the freedom to think and act and they believe strongly that they can do whatever they want to do and be whoever they want to be. These people think they are special, because they were told so their entire life; millions of Baby Boomers all around the country and world told their Gen Y kids that they could be whatever they wanted to be, instilling the special protagonist identity deep within their psyches.

“Do whatever caters to your strengths”, “Don’t settle for anything less than work that you love” are quotes often repeated by their circles of friends, family but also their professional circle, as well as the media. They were given trophies for each accomplished mission, even the ones they did not put efforts into.

We can see a surging sense of self-worth for Generation Y. There is a disconnection between the generation Y’s opinion of themselves and their actual abilities. Generation Y kids have a real sense of entitlement.

They aspire to entrepreneurship

The seed has been planted since their youngest age: they are capable of changing the world.  This shows real ambition as well as an optimistic and entrepreneurial spirit. As a matter of fact, 37% of Gen Y students intend to own their own business within 10 years. 51% are interested in being self employed. It’s the generation where “everything is possible” and each great entrepreneur will make you believe that the financial goal is not the important part, but the journey filled with passion is. Generation Y highly values independence and freedom. the phrase “a secure career” has gone out of style, just as the phrase “a fulfilling career” has gotten hot.

Generation Y defines itself as free from any kind of restraints. Indeed, 54% would rather take time off to pursue a hobby than be on “the fast track”, 41% say it is important that the company they work for offers sabbatical leaves and 20% are planning on quitting or taking time off to do something for themselves. They feel like they own the world and that freedom is a natural human aspect.

88% think it’s more important for the company they work for to value work life balance. 73% say it’s important that the company they work for makes a positive impact. They live for experiences and want to use those in order to not only follow a career path but to touch and discover everything and make the difference in a professional level as well as personal. “Yers” wants to change the world, and wants the world to know how special they are.

Is it egoism, narcissism or simply an extreme ambition that guides this generation? Some people from the previous generation, also called Generation X, look at how Generation Y acts and see unskilled, spoiled people who don’t want to face the unfairness of life, and who won’t obey to the rules, spending time dreaming and waiting for the “Deus Ex Machina” to happen.

Is it that simple? Generation Y is also creative, innovating and full of ideas and hope. The complexity of this generation can’t help but raising questions, and leave some people disturbed and suspicious. Let’s try to place a little trust in Generation Y, because after all, they are the ones holding the future in their hands.